The best blue Sapphire or Neelam is found in the India called’ mayor neelam’ A good Neelam should reflect no color other than its own, be with brilliance, smooth, transparent, solid and spread out rays from inside. The sapphire is a corundum, an aluminum oxide with a trigonal crystal structure, in the same family as the Ruby. The only different between a ruby and sapphire Is simply the color. A red corundum is a ruby, Other colored corundums are called sapphires, which comes in many colors, the most well known being blue. Because sapphire are available in so many colors, they are the most important and versatile of all the gemstones .Rubies and sapphires are said to be prized just under the level of diamond because of other hardness. Diamonds are listed as a ten in terms of hardness, sapphire as a nine. The attribute of hardness of a sapphire makes it a perfect choice for jewelry that needs to stand up to everyday wear , such as in rings or bracelets.

The gem’s inclusions reflect light that yields a faint sheen referred to as’ silk’. The most transparent colorless variety of sapphire are known as’ Leucosapphire’. Some have streaks of pale color inside, some have that slightly silky sheen and in strong light, their color intensifies. Sapphires are usually given round or oval cuts but rectangular or squares cuts are also possible.

Sapphire also comes in violet, dark gray, orange, yellow, pink, green and black, which tends to be relatively inexpensive. These different colored sapphires are referred to a ‘fancy sapphires’ and are often less expensive than the blue ones, yet equally as beautiful and a fine alternative to blue. A rare colored kind of sapphire is called ‘Pasparadscha ’which means ‘Lotus color’ It is the only color sapphire given its own name besides the Ruby. This stone is orange and pink simultaneously and can be very expensive.

In the middle ages, people believed wearing a sapphire suppressed negative thoughts . It also has been long believed to have a curing power for natural ailments .In ancient Persia, if ground up, it was used as an purpose medicine. Ivan the Terrible of Russia stated that the sapphire strengthened the heart and muscles and endowed a person with courage. Others said it was an anecdote for poison—it killed snakes on site and if engraved with the figure of a man or a ram, would cure all illness and elevate the owner to a high position.

In parts of the Orient, Saturday was the day to dress in blue and wear blue sapphire. The color blue and the blue stone indicated wisdom, and generous thinking. It is also associated with the study of heaven and the stars. Psychologically, the sapphire helps maintain inner peace and is good for one’s mental state. They calm nerves and promote mental clarity, helping with focus and concentration .They have also been used as remedies for mental and nervous disorders.

Working with sapphires help promote appositive attitude towards life, promoting self motivation and helping move forward towards a path of self fulfillment. Physically, sapphire promote general health. They are said to have powers in cooling fevers, protecting against mental illness and sharpening eyesight. One ancient recipe for eyesight was to powder the stone and mix it with vinegar. The same recipe was used to treat nosebleeds. Sapphires were also used to treat fevers and rheumatism. When treating boils and external ulcers, they were ground and mixed with milk. The paste was then applied to the afflicted area. They are also said to cure ulcers.

The stones are available in wide range & various sizes in form of Ring/Pendant. All stones are 100% lab certified and delivered with lab certificates:
Size Available: 5.25 Ratti (4.85 Carat) (Other sizes are also available on demand)
Metal: Ashtdhatu 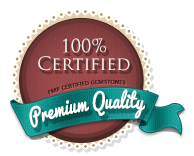