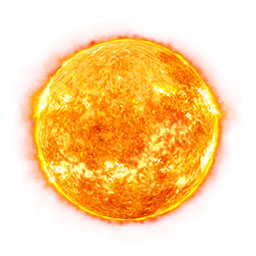 The Sun is the star at the centre of the Solar system. It is made of hydrogen and helium, and in the core hydrogen is converted to helium by nuclear fusion, generating the heat and light radiated by the Sun. Out of the 9 Grahas, the Sun is by far the biggest, and all the others revolve around the Sun, held in orbit by the gravitational pull of the Sun. The Sun is largely responsible for upholding life on earth, by supplying heat and light. The energy of the Sun is often released suddenly through solar flares (sudden discharges of high-energy radiation and atomic particles) and Prominences (huge flares of gas erupting from the surface of the Sun). 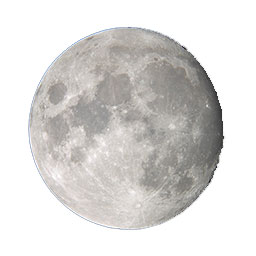 The origin of the Moon is still a subject of some scientific debate, but the most accepted theory is that the Moon was formed of the debris from a massive collision with the young Earth about 4 . 6 billion years ago. The Moon’s gravitational influence upon the Earth is the primary cause of ocean tides. In fact, the Moon has more than twice the effect upon tides than does the Sun. The Moon makes one rotation and completes a revolution around the Earth every 27 days, 7 hours, and 3 minutes. This synchronous rotation is caused by an uneven distribution of mass in the Moon (essentially, it is “heavier” on one side than the other) and has allowed the Earth’s gravity to keep one side of the Moon permanently facing Earth. The Moon has no atmosphere; without an atmosphere, the Moon has nothing to protect it from meteorite impacts, and thus the surface of the Moon is covered with impact craters, both large and small. 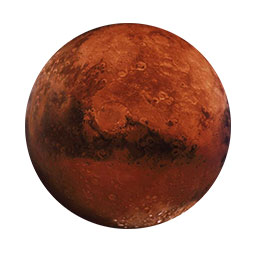 Mars is the first planet outside the orbit of the Earth. It holds only a thin atmosphere, which is transparent, so there is a clear view of Mars’ surface. Occasionally there are dust storms, which spread over most of the planet, hiding its surface completely. The poles have ice caps (made of water and carbon dioxide). The surface of Mars is rocky, and the characteristic red color of Mars comes from the iron oxide dust which covers large areas. Mars has the highest craters of any planet in the solar system. There is strong evidence from the landscape that in the past Mars had water in liquid form. The rotation period of Mars is just like the Earth, and its axis has a similar tilt. Like Mercury, its orbit is decidedly eccentric. 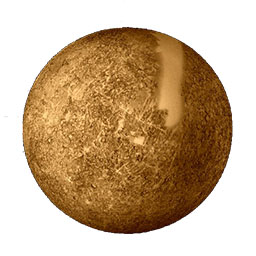 Mercury is the closest to the Sun, in the range of 46 to 70 million km. It moves faster than any other planet, completing a full orbit in less than 88 days. Mercury is also the smallest, and has the greatest density. The planet rotates around its axis very slowly, taking almost 59 days for one rotation (only Venus is slower). Mercury is rocky, with virtually no atmosphere . Most of the surface is heavily cratered by the impact of meteorites. Some areas are less cratered. Mercury has ray-craters, a type not found on the Moon, which give a characteristic look to the planet. The core of Mercury is most likely of iron. Mercury gets very hot on the sunlit side, up to 430 ° C, and very cold on the dark side, down to 183 ° C 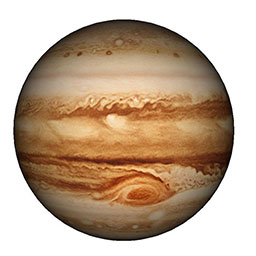 Jupiter is the largest planet is the solar system, bigger than all the other planets combined. Its composition is similar to the Sun? Its main constituent is hydrogen, but unlike the Sun, Jupiter has a small rocky core. There is no distinct surface, because it is made up of gas, and is merged with gaseous atmosphere. Because Jupiter spins around so quickly (one rotation takes only 10 hours), the atmosphere is in constant turmoil, forming ever-changing belts and zones that encircle the planet parallel to the equator. 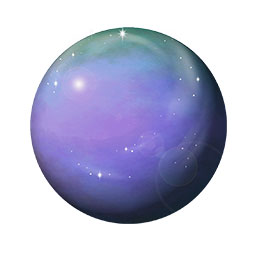 Venus is the brightest object in the sky except for the Sun and the Moon. Since Venus is an inferior planet, it shows phases when viewed with a telescope from the perspective of Earth. Venus’ orbit is the most nearly circular of that of any planet, with an eccentricity of less than 1 %. Venus’ rotation is somewhat unusual in that it is both very slow (243 Earth days per Venus day, slightly longer than Venus’ year) and retrograde. Venus is only slightly smaller than Earth (95 % of Earth’s diameter, 80% of Earth’s mass). Venus has thick layers of clouds composed mostly of carbon dioxide. These clouds completely obscure our view surface and produce a run-away greenhouse effect that makes Venus’ surface temperature hot enough to melt lead. Most of Venus’ surface consists of gently rolling plains with little relief. 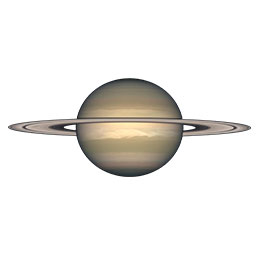 Saturn is the second largest planet in the solar system; only Jupiter is larger. Like Jupiter, Saturn is a giant ball of gas with no solid surface beneath its clouds. The colorful clouds of Saturn (and Jupiter) are composed of ammonia ice crystals. Saturn’s atmosphere above the clouds is approximately 96% hydrogen and 4% helium. Winds near Saturn’s equator blow toward the east at 500 m/s ( 1100 mi/hr). Saturn has a volume 764 times that of Earth, but weighs only 95 times as much. Saturn is the only planet in the solar system less dense than water: it would float! Saturn has a larger ring system and more known moons ( 18) than any other planet.